a little bit of hope, joy, love, grace, life and all things in between infertility

In January of 2013, our family started our so-called “Blessing Jar”.  The idea came from a conversation I had with my son after picking him up from school.  To read about it, click here. 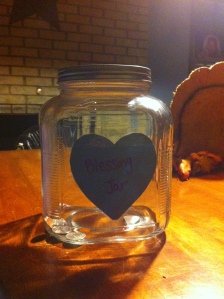 Throughout the year, we intentionally added our spare change to the jar.  We never pressured our kids to put money in it, but were pleasantly surprised when they eagerly added money they found in parking lots, and money given to them as gifts.  Thanksgiving weekend of 2013, we cashed out the jar and talked to the kids about where they wanted the money to go.  After discussing the various options, they decided upon a local group called “The Gathering Tree”.  They feed homeless and impoverished people in our community, and rely almost solely on the kind acts of donations of money, food, and man-power.  You can read about the first time we delivered our Blessing Jar money by clicking here.

As we approached Thanksgiving this year, we decided that it was time to share the collection of change in our Blessing Jar.  I asked the kids, “Who do you want the money to go to?”  I listed several options in our community, and even included organizations that help animals (we are pet-lovers).

To my pleasure, our two oldest children suggested the money should go back to “The Gathering Tree”, and they wanted to make sure it was used to help feed people who do not have food or a home.  With the help of a friend who has been heavily involved in the group, I arranged the time for us to meet up with the people who started the group.

This morning I reminded the kids that today was the day we emptied our Blessing Jar and gave the money away.  They were both really excited.  After talking more about it with my daughter (age 6), she decided that she wanted to bake some muffins to take to them as well.  We spent the morning baking Banana-Zucchini-Chocolate Chip Muffins!  They even decided to donate all of their weekly allowance to the jar.  Unbeknownst to me, my mother had decided to pitch in as well and help the kids with their money collection, so after a quick stop to pick up her portion of the donation, we headed down to center where a meal was getting ready to start.

As we stood there waiting to deliver the money to the gentleman who started the group, we watched as the line for a warm meal (they cook very nutritious meals) grew quite big.  Even after working in the field of social services for the past twenty years, I was a bit taken back by the number of people being fed.

We were pleased to give the group quite a bit more than we were last year, and our hope and faith is that God can take it and multiply it to meet the needs of this community. 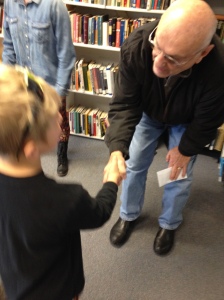 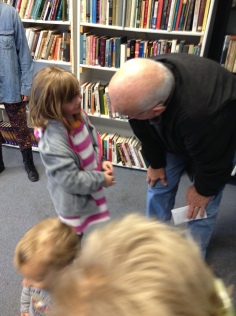 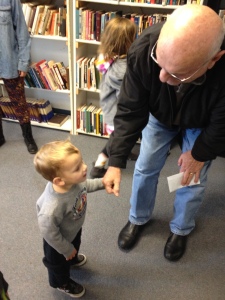 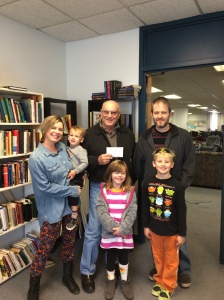 If that were the end of the experience today, then it would be just fine.  However, shortly after delivering the money, a gentleman came up and hugged my friend.  He told her how much he appreciated all of the help she and the group has provided him.  “They changed my life”, he said.

As we stood there listening to him, tears started to well up in my eyes, my friend’s eyes, and the eyes of the gentleman before us.  This gentleman explained that before he became homeless (he told us he was a farmer before his current situation), he used to judge others who were homeless.  He also did this even during his homelessness.  As he watched the group show kindness to each other, he learned how to treat others with compassion and to not judge all within any group based on stereotypes.

After we left the center, the kids talked about the people who were there eating. They were glad that the money we gave will help feed them again.  My daughter was also glad that she baked some muffins for them to eat.  While tucking my son in bed tonight, he talked about maybe someday helping to serve the meal.  I told him that I would check into that for him, but I think that would be an awesome thing to do.

As my husband and I processed the day, I told him that the fellow to whom opened up to us had been on my mind all day.  My husband agreed.  The fact is that it does only take a little bit of kindness to potentially change someone’s outlook on life.  For that matter, kindness can not only change an outlook, it can change a life.

To be reminded by a homeless man that there is great power and potential when judgement is confronted by compassion is probably one of the most humbling reminders of all.

To look around the room today, and see people who are struggling, who may only get that one meal of the day, who may be sleeping under a bridge tonight, who may be lonely, depressed, thankful, or prayerful, and to watch them ask about each other’s well-being, smile, hug, and show kindness to each other, was a blessing.

The Blessing Jar project started as a seemingly simple way for us to teach our young children about compassion and generosity.  We are finding, though, that we too are gaining lessons from it.  We are learning that despite our own challenges (and we have them), we have so much to be thankful for.

We are also learning that when you set out to change the life of someone else, it is often that your own life is changed for the better.

Give, and it will be given to you. Good measure, pressed down, shaken together, running over, will be put into your lap. For with the measure you use, it will be measured back to you. -Luke 6:38

Like this? How about sharing it? After all, sharing is caring!

Join 1,337 other subscribers
Follow BARREN TO BLESSED on WordPress.com

Hello, friend! My name is Caroline. I'm a wife and mother of three children. In 1983, at the age of eleven, I became gravely ill and ended up needing an emergency hysterectomy. I am blessed by the adoption of my children and have great peace with my "lot in life". I am deeply passionate about encouraging others struggling with infertility and about advocacy for foster care (two of our kids were adopted out of foster care). I no longer consider myself barren. I consider myself fruitful, joyful, whole and blessed. Photo Credit: Randy Bacon, Photographer www.7billionones.org

Looking for something special?