a little bit of hope, joy, love, grace, life and all things in between infertility 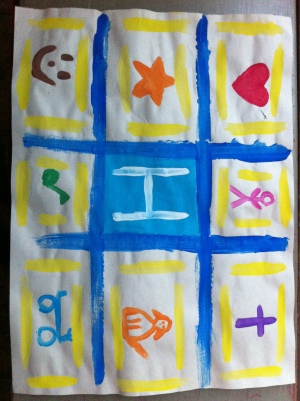 It is hard being a kid these days.  Their actions are usually fairly age appropriate, and yet, they are told to work on their “behaviors” on a pretty consistent basis.  I really do not recall as a child being reminded to “make good choices” or being told “you need to work on that behavior”.  I was disciplined and taught the correct way to interact with others, but it was done from the perspective that children will be children.  My actions as a child were not taken so seriously and certainly were not thought to be truly indicative of the adult I would end up becoming.

My son is precious, but boy he is a pistol!  High energy, fearless, creative, smart, and strong-willed are a few of the words that define him.  Let’s just say he has had his fair share of “behavior management” in preschool.  I often wonder how his perception of himself has been shaped by the continual reminders in the preschool setting to make good choices, earn rewards, “stay in the green pocket”, or any other motivational system put into place to keep kids in line.  I’m NOT saying that I disagree with these things as I know they have their place in helping children.  I just feel we expect children to be little adults far too often.  My son told me one time that he gets stressed out about school…seriously.  He’s not even in Kindergarten yet and has already felt stressed by the expectations of the academic setting.

Back in 2010 when he was close to four years old, we were painting together at the table.  He had been having a difficult time socially, didn’t mesh with the teacher, and was actually asked to leave the preschool.  In an effort to comfort him, I said “You know mommy loves you very much.” He said, “I know”.  Then it hit me.  I told my kids all the time how much I loved them, but far too often I failed to tell them why I loved them and what makes them unique.

In that moment, I grabbed the paintbrush, piece of construction paper, and started to paint a flag for him.  When he asked me what it was, I said “It is your flag.”  He giggled as he was not really sure what to make of it.  After I was done, I explained the meaning of it to him.  The blue represented his favorite color.  The middle letter in the flag is the first letter of his first name.  Above his name is a pink stick figure which represented the fact that he is a good big brother to his little sister.  The cross in the corner was because he loves going to church and singing about Jesus.  The orange dog symbolized how much he cares for our pets.  The bike below the dog was there because he loves riding his big wheel and really anything that has wheels.

The music note was for his love of singing and enjoying music.  The happy face was because he makes so many people smile and laugh.  The star represented the fact that he loves outer space.  And, the heart, well, it was not only because of how much he loves his family, but because of how much love he has brought to our home and to our hearts.

After explaining this, my curly, blonde-haired cutie could not stop grinning from ear to ear.  He grabbed it, ran to his daddy, and said “Daddy!  Look at my flag!”.  I know I am not the best artist and the flag is quite elementary, but it did so much in that moment to lift the spirits of my child and show him the reasons why he is loved so much.  Afterward, we went to his bedroom and hung the flag on his bulletin board.

Two years later, the flag is still there.  It still serves as a reminder to him of the unique factors that make him who he is.  I am not a perfect parent and I certainly fall short many times on having the best words at the right moment with my kids.  But, there are those times when the right opportunities come along to make an impression on my kids that will not be about their “behaviors” but, more importantly, about their beings.

That simplistic paper flag that is tacked to my son’s bulletin board holds a deeper meaning than it appears.  It reminds my son of the time his mommy painted his flag.  But, most importantly, it serves as a visual reminder for me to show through my words and my actions that they are fearfully and wonderfully made.

“I praise You because I am fearfully and wonderfully made; Your works are wonderful, I know that full well.” – Psalm 139:14

Like this? How about sharing it? After all, sharing is caring!

6 thoughts on “Fearfully & Wonderfully Made”

Join 1,337 other subscribers
Follow BARREN TO BLESSED on WordPress.com

Hello, friend! My name is Caroline. I'm a wife and mother of three children. In 1983, at the age of eleven, I became gravely ill and ended up needing an emergency hysterectomy. I am blessed by the adoption of my children and have great peace with my "lot in life". I am deeply passionate about encouraging others struggling with infertility and about advocacy for foster care (two of our kids were adopted out of foster care). I no longer consider myself barren. I consider myself fruitful, joyful, whole and blessed. Photo Credit: Randy Bacon, Photographer www.7billionones.org

Looking for something special?